Hey guys, welcome to Star Struck Gaming’s  vintage game review. Hopefully this will become a regular feature and will take our older readers back in time to the days of controllers that actually had to be attached to the machine ( such a time ever existed I hear from the younger readers), and controllers only had A,B and C buttons with a D-pad. In some cases there was a singular stick with a fire button.

New consoles have got it good

You never had to wait for a game to install as you do with the latest consoles, we had cartridges which were rectangular pieces of plastic awesomeness that once slotted into the top of your machine led to some of the most iconic loading screens ever.

Scratches were not a worry, if a cartridge stopped working the mighty blow into the slot technique worked practically every time.

Forget HDMI cables and charge packs, come with me to a time where the only reason you shouted at your gaming device was either annoyance or exhilaration. If you were caught trying to tell it to turn off via voice you would be carted straight off to the loony bin! 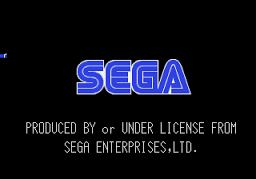 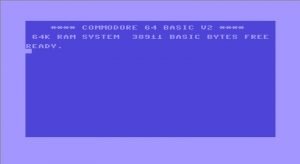 So let’s put on the rose tinted glasses, turn up MC Hammer, and make our way to this week’s game/character. James Pond is a classic Megadrive game based around a secret agent fish hired by the British secret service to keep the oceans safe and clean.

Everything is going well until Dr Maybe ( a parody of Dr No) arrives on the scene, not only threatening the oceans but the world from his base under the ocean.

James is armed with his bubble gun which he uses to trap his enemies and take them out by popping the bubble, there are numerous puzzles to solve during the game that usually involve collecting a certain item blocking oil leaks with sponges or finding a key to rescue a trapped lobster.

These days this sounds quite boring but back then this was your classic game plot, nothing overly complicated, colourful graphics, and simple controls. At the same time it was solid, and you definitely got your money’s worth from the game.

The music was a mixture of a trumpet and like strangling a duck in the intro, but thankfully it got better during the game as I personally couldn’t have taken hours of what began to sound like Donald Duck on acid! 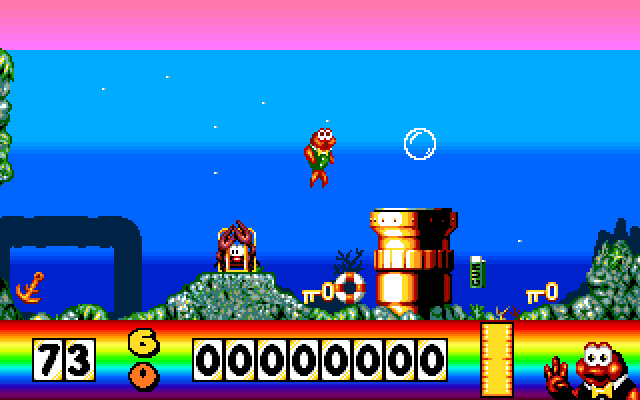 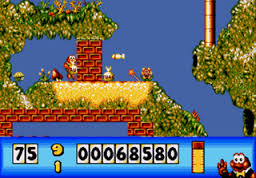 The levels in James Pond were quirky, well thought out, and very colourful as you can see from the above images. There was a real aspect of wittiness, each level gave a twist on an original Bond film – licence to Bubble (Licence To Kill), Leak And Let Die (Live And Let Die) and my favourite; A View To A Spill ( A View To A Kill).

James Pond was established and became very successful spawning a sequel named Robocod which expanded on to other consoles, and even the Commodore 64 which proved the idea had caught on and other people were keen to play it. 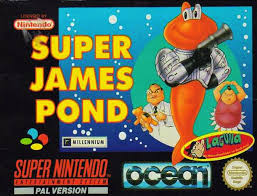 Robocod was set directly after the events of James Pond and only improved on what was already a winning formula, adding a metal suit to James that allowed him to extend his body to reach new heights. This greatly changed the level design of the game.
The game still kept Dr Maybe but he has now taken over Santa’s toy factory in the North Pole, where Santa’s helpers are held captive with some actually helping the Dr ( no presents for them this year).

Progressing through the game

The whole game is around 50 doors in size, you have to go through each to progress. You would encounter a boss character every 2 doors, progressing through was no easy task though, the bosses were far from simple ranging from a giant snowman to a teddy bear with spikes on its bottom who was determined to sit in your lap!
A distinct difference in Robocod was the lack of gun missing in the original James Pond, I mean he is playing the fish equivalent of Robocop shouldn’t he be brandishing a meaty machine pistol and shouting “dead or fried you’re coming with me!”
The developers obviously knew what they were doing with regards the weapons available. I assume this was done as to appeal to the younger gaming community as did the whole concept of being based in Santa’s toy shop, you can see from the graphics used in the levels that even they are designed for a younger gamer. I mean how threatening can a big fluffy bear be?
Throw in some sharp teeth and claws and we’ve got a monster on our hands, but to keep in with the game’s nature EA decided to go for the slightly constipated look!
I imagine Rockstar would have made Lawsuits everywhere ‘Gaming bear rips out heros lungs and buggers his still twitching corpse’! 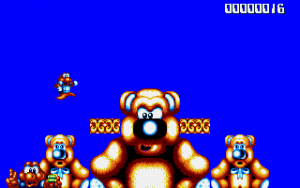 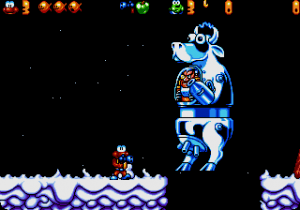 There were also items added to the game from wings and cars, to flying bath tubs to add variety to the gameplay but these were few and far between but still a nice little touch and helped the game stand out that little bit more At the time a certain  blue hedgehog was about to explode onto screens and take the limelight for the next few years.

All in all James Pond and Robocod were great games in their era, and still live on today in a recently released Mobile game.

I cant see James Pond ever resurfacing as there is no real demand for games like this anymore,  and recent attempts to take old gaming characters in new directions have fallen at the first hurdle. This is a shame as these characters paved the way for future games, and should be left in peace to be remembered as they were and loved by their fans.

If you’ve still got your Megadrive I’m sure you could find these on Ebay etc for a few quid, that in my opinion is a bargain,

I hope you have enjoyed my first ramblings on Star struck Gaming’s vintage review, and I hope to be able to do many more and to hear your feedback. Listening to people’s opinion can only be a good thing!