I have to be honest, I was a late bloomer when it came to playing any of the Uncharted games, mainly because I had a PS4 and then switched to Xbox – fortunately I now enjoy a multi-platform experience.

Teaching you guys how to suck eggs isn’t where I’m aiming to go with this article, especially if (which most people already have) you already bought and played through the entire collection – let alone just the first game like me!

Instead, I wanted to share my review on why I feel this game is still awesome if you are yet to try any of the uncharted series.

After playing this game (I have the Remastered Nathan Drake Collection) for about 1-2 hours the very first thing that struck me was the straightforward gameplay style that was so refreshing to play through.

By this I mean, unlike probably 99% of all games that are released today rely on collectables to finish the game to the right standard.

Agreed, there are Treasure Collectables which you can focus your attention on whenever you like, but I cannot stress how great it feels to just get on with a game’s story and not worry about looking for items to be able to progress through the game.

Although a complete different game genre, I guess an example I could relate this relief to is Resident Evil Biohazard where you have to look in every corner of the game to be able to find progression items.

If climbing cliffs and jumping up ancient platforms float your boat then don’t miss this one. Throughout the story you’ll encounter 1 or 2 enemies ( 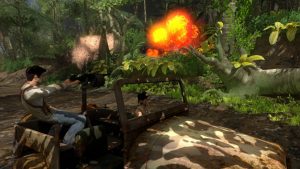 to say the least) who are out to kill Nate (Nathan), and you’ll be treated to a roster of different weapons to aid in taking them down.

Make sure you get the hang of using cover though!

Uncharted fans will know how good this game looked when playing it on a PS3 console, but releasing the Nathan Drake collection to include the first three stories of the franchise was just a big fat wow factor!

SSG Fact*** did you know that the Uncharted series was developed by Naughty Dog? Don’t know who Naughty Dog are? Think back to the guys who released Crash Bandicoot and you’ll be pretty close to remembering how big the games developer is!

If you’re like me and love the concept of cave diving, looking for treasure, while trying not to set off booby traps then you’ll love this game.

Aside from the intriguing storyline of Nathan Drake, players are treated to the task of exploring caves and solving puzzles – although not the most challenging, they definitely get your brain thinking about what needs doing, often taking a few attempts to get it just right.

There’ll be a point in the game (other than the ending) where you realise you just have to play the second game in the franchise – I mean I’m sure you would if you have the remastered collection anyway!